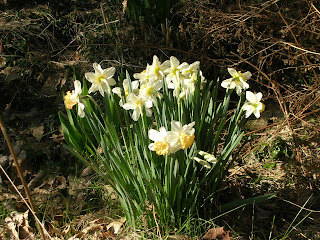 
My buddy, Kathleen Gips at The Village Herb Shop asked about petunias.  I remember in our garden when I was growing up, the rabbits loved our petunias.  I thought they might be an edible flower and the link I gave you for inedible flowers has an edibles list and petunia is on it.  I wanted to dig a bit deeper.  When I did talks on edible flowers,  I found a photocopy of a February 1990 article in Organic Gardening magazine by Rosalind Creasy.  She is one of my go to authors about edible flowers.  I'm going to add these following flowers to my list because she says to avoid them because no reliable documentation for their safety has been found:

I greatly respect Rosalind Creasy and think that it is better to lean on the side of avoidance than to have a bad reaction because you aren't sure and decide to experiment!

I have given you a lot of the more common inedible and poisonous plants in this list.  This is an additional list from homecooking at about.com for non-edible poisonous flowers.  Oh, look, black locust is still on the list!  Now you know that black locust may have some toxic parts, but the flowers are edible.  So please do your own research.  I will be adding your additionals as necessary.