Please Keep Her in Your Thoughts and Prayers! 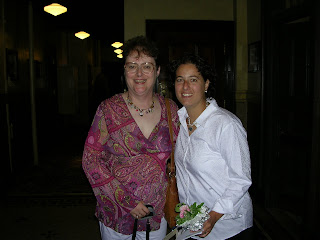 I just realized I had a photo on my new computer of Deana and me when The Herbal Husband and I took her out to celebrate becoming a registered architect to the Grand Concourse.  We had the best time that night.  I made her a tussie mussie.  Today's not only May 5th (I know I posted this yesterday), but it's Deana's birthday.  Happy, happy birthday, Deana.  Everyone who reads my blog is praying and hoping that you get better soon.

We learned late last night that our dear friend, Deana, has been diagnosed with multiple myeloma, cancer of the plasma cells!  The Herbal Husband worked with Deana at a downtown architectural firm and they became fast friends.  If anyone can beat this disease, it's Deana.  She's a Texas Aggie, first and foremost!  She has the loving and powerful support of family and friends.  This disease is going to have to fight us all, including Deana's mother and two sisters and her husband's family as well.  We are only sending positive energy!  We consider ourselves adopted by her family and we have enjoyed being with them on all occasions.  Her youngest son just turned 2 and her oldest son will be 12 and her daughter will be 8.  Deana is a young vibrant woman who wants to live for her family and friends.

This disease recently took the life of Geraldine Ferraro.  We refuse to believe that Deana will be nothing short of a miracle in her treatment.  She has already started at the Hillman Cancer Center here in Pittsburgh.  To get a second opinion (which insurance would not cover) would have cost $35,000.  Something is wrong here, people, but I'm not going to get negative!  Please keep Deana in your thoughts and prayers!

Pretty soggy in the 'Burgh.  We have had over an inch of rain in the last three days.  Got to run and make some more horseradish jelly.  Talk to you later.
Posted by Lemon Verbena Lady at 11:27 AM

My thoughts and prayers are with Deana (and you all).

Yes, something IS wrong with the picture, but let's use all our energy to envision health for Deana.

I pray that Deanna will heal, she sounds like a vibrant person, mom and friend.

I will keep Deana in my prayers and send a triple dose of positive thoughts her way.

I will keep her in my prayers.

I am so sorry to hear about your dear friend. With all of that support her chances are greatly improved! I am sending blessings and healing your way. Keep us posted.

Positive thoughts are being sent out. Don't get me started on this system with insurance and doctors who used to spend time with you. They say with positive attitude it will help fight the battle, and with love around it makes it even better!

Ugh, isn't modern medicine great? Too bad we can't use it. Warm healthy thoughts from Texas to Deana.

Thanks to all of my favorite blogging friends for their support and love for Deana. I have sent the post to her for her to read your thoughts, prayers and blessings! You are all the best! xxoo Nancy

Our thoughts and prayers are with all of you as well. Positive energy can be a very powerful force.

Jules and all at MoonCat Farms

Sending healing thoughts and prayers to Deana and all who are there to support her.

What a sweet picture, Nancy! I will be praying for a happy post about this family in the future.

I've be watching the mailbox for my horseradish jelly!

Thanks to all my favorite blogging friends for your thoughts and prayers! I'm praying my jelly sets Sharon! I think I screwed it up and you can't use it on ice cream!

Joining in on all those very positive thoughts & prayers for your friend, Deanna.

Thanks Pat. Her blood work continues to be good. She received her second treatment on her 39th birthday. She has a lot of support from her families and friends and my dear blogging buddies! Thank you very much from Deana and me.

I hope that your friend has the stamina that a wonderful lady in our town, Kathy Giusti, has! She has the disease and has the fight of a Mother lion! See this link for more info about her http://www.thedailynewcanaan.com/tags/multiple-myeloma-research-foundation
Her husband is active in our Town as well. She has rallied a great number of people around this cause and hopefully the research foundation will make a strike at this disease!