Seems Like Only Yesterday, But It Is Hotter Than You Know What! 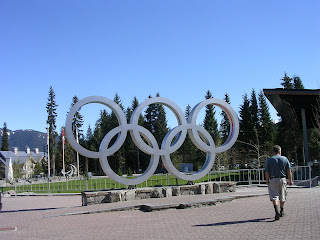 I'm not sure this will be a clue to where we have been.  This city we visited had the Winter Olympics in 2010.  Yes, you are correct, Vancouver, British Columbia.  This happens to be Whistler where all of the skiing happened.  The Herbal Husband and I took a float plane up to Whistler and had afternoon tea on the train coming back.  It was really a deluxe trip and IF I'm ever diagnosed with an incurable disease, I have had one of the best adventures of my life.  I will post more photos of this trip, because it was magical.  This is where the Olympic ceremonies for the skiing and maybe the snowboarding (Is that an Olympic sport?) were.  Duh! 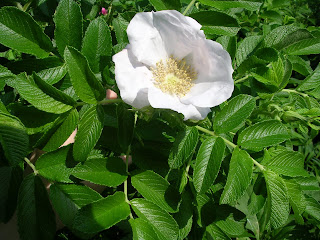 We both missed a lot in the garden.  We have left spring behind and jumped right into summer.  It was 90 yesterday and today!  It's May people!  What happened to that nice transition!  Gone!  The lovage in my herb garden has already bloomed and so has the angelica.  What I'm most excited though is my Rosa rugosa 'Alba' has finally bloomed.  Took it three years!  I moved it around a few times!  Maybe that was the problem!  A most delicious edible flower.  One of my favorites.  Well, the garden is a jungle.  Had to hand clip some of the grass down before I mowed today.  Hope you have had a great day wherever you may be.  More adventures to come.  Talk to you later.
Posted by Lemon Verbena Lady at 5:08 PM

I can hardly wait to hear about your trip! Hope you had a great time.

We are away from home right now. It was 55 degrees when we left on Saturday, and I heard it is now in the 90's! We are going to be seeing a lot of herb farms, but I am missing my garden. Not a good time to travel, I'm thinking.

Thanks ladies for stopping by!

Great to see your post - don't you love British Columbia??!!! It has to be one of my top favorites in all of Canada. Did you get to Butchart Gardens? Your tea on the train sounds very special.

Making up for the last year - my little herb garden has been completely renovated and most of the veggie seeds are in. We have strong winds now and it is drying everything out quickly.

The new Night Blooming Jasmine from Richters looks healthy but has a long way to go before it has any size to it.

Oh you were up in my territory! Sorry about the grey skies and rain (I'm SURE you had rain...) it's not always like this...

Yes, Butchart was on the itinerary, TO! My garden is going to be like yours was last year! I'll just enjoy yours this year!

Hi Heather, we didn't have as much rain as you may think. We brought sunshine almost wherever we went!