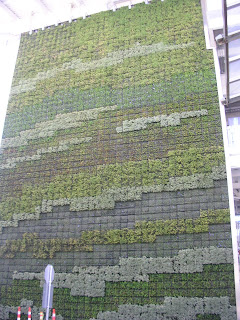 When we arrived in Vancouver this was a wall of plants was on the parking garage at the airport.  I think it is pretty cool.  This is VanDusen Botanical Garden below.  My herbal companion, Bonnie and I went with Country Living Gardener magazine (The magazine is gone but not forgotten!) on a wonderful trip to the Pacific Northwest in 1999.  We were both sick.  I had infected ears and a sinus infection and Bonnie got sick at the end of the trip with bronchitis.  We were a pair!  This time VanDusen was hosting a classic British car meet.  Not into cars, just the gardens. 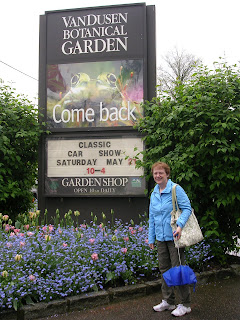 This is a bit of VanDusen history from the website.  In 1910, this site was an isolated acreage of stumps and bush. It was owned by the Canadian Pacific Railway and was leased by the Shaughnessy Golf Club from 1911 until 1960 when the golf club moved to a new location. The railway proposed a subdivision, but was opposed by many citizens. In 1966, the VanDusen Botanical Garden Association was formed to assist the Vancouver Park Board with saving the site. This effort was successful and the land was purchased with shared funding from the City of Vancouver, the Government of British Columbia and the Vancouver Foundation with a donation by W. J. VanDusen, after whom the Garden was named.  Development started in 1971 and VanDusen Botanical Garden officially opened to the public on August 30, 1975. 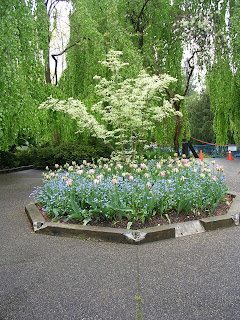 The spring bulbs were in full bloom here.  Such beautiful displays. 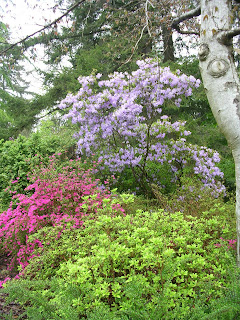 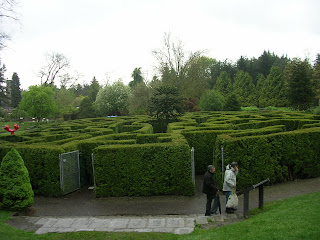 A maze for young and old alike. 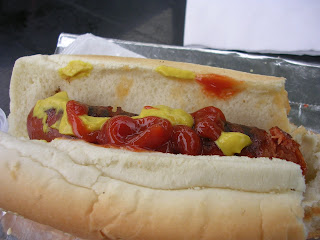 Of course, the favorite part for The Herbal Husband was the food.  Here is a Smokie, a very good lightly smoked sausage or hot dog, but more like a sausage.  Remembered to take a photo after that first bite was gone.  You will see a lot of those kinds of photos.  I overindulged in food on this trip.  Working on getting it off. 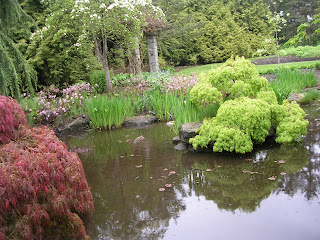 A pond with a Japanese influence. 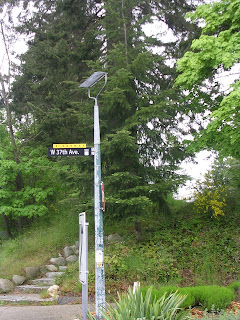 This sign post is actually a garden rake for a big garden!  Just thought it was a great way to advertise that a garden was near.  My post for my Herb Companion blog will be the herb garden of VanDusen.  So stay tuned.

Here are some blooms we both missed in our garden. 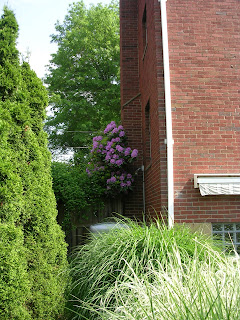 This is a rhodie in our garden that was shaded out by the burning bush that had taken over the space.  It can now grow and bloom without problems. 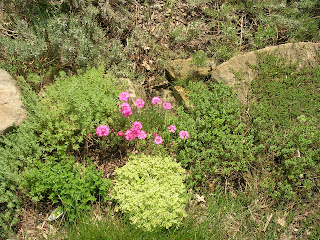 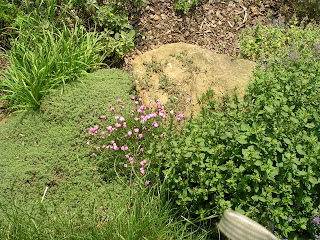 Another pink dianthus called 'Tiny Rubies'.  Ideal for a container.  Getting carried away.  Will save some other bloomers for another post.  Still very hot here.  Hoping for a break tomorrow. Hope you are having a great day.  Talk to you later.
Posted by Lemon Verbena Lady at 1:59 PM

The Maze looks fun - did you go in it?
Love Leanne

No, the nephew's son did and he wasn't as fast as he usually is. I was afraid that I would never find my way out! xxoo Nancy

Such beautiful garden and that maze looks so fun! Glad to see you back :)

I've got to stop by Carol! Glad to be home.