A Yippee Kind of Day! An Update to the Kitty and Squirrel Game! 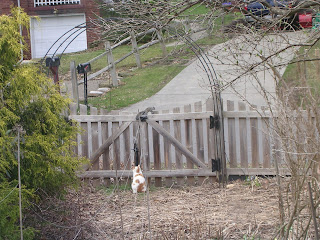 Up and running again with the new computer!  It is going to be trial and a lot of errors until I get familiar with it!  No fighting any more to get time on the computer!  Yippee!  Really Kitty has grown on me even though I'm allergic to it.  It was playing with a squirrel the other day in the front garden. 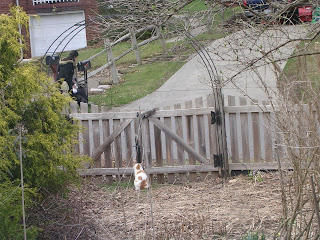 Here a dog entered the picture and squirrel ducked under the fence line!  You had to be there!  I can't make this stuff up.  They did get bored in the end and no wildlife was hurt in the process. 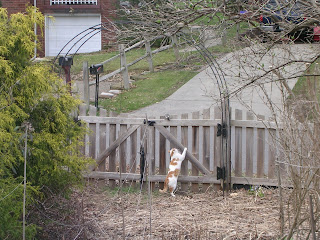 Then the next day I was going out to the mailbox to get the mail and discovered this.  See these bushes on the left side of the photo.  They had a new edition. 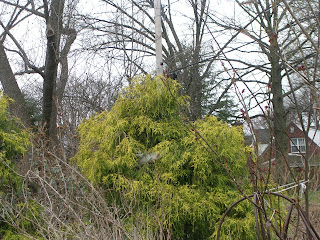 It was like the Cheshire Cat in Alice in Wonderland.  There Kitty was sitting up in this bush!!!  I just can't make this up!  Missed blogging.  Now I have to catch you up on other items, but I have to figure out how to get photos from the computer upstairs to my laptop.  The nephew in Canada said he would help, but we are going out to dinner to celebrate our new Fios!  My computer is so much faster!  Yippee!  It has been raining a lot, almost an inch!  Hope you have had a great day wherever you may be.  Talk to you later.
Posted by Lemon Verbena Lady at 4:00 PM

Email ThisBlogThis!Share to TwitterShare to FacebookShare to Pinterest
Labels: Adventures of Kitty and, Herb Garden Weather

No herb garden is complete without a resident kitty! I'm just saying...

Watching the interaction between resident pets and wildlife can be very interesting! Your pictures say it all...what fun.

I use an old laptop but even if I had a fresh out of the box model, it would still be slow because of our provider..."high speed" to rural folks is still a long ways off.Enjoy your new toy - know you will love it.

So good to see you again! I would have loved to have seen this in person! You COULDN'T have made this up!!!

Hi ladies, Yes it was a wild several days. Glad to be back blogging with you all!

Glad you're back...sure have missed you!

Get a flash drive! So easy to transfer stuff from one computer to another. Just plug it in the USB port and then copy and paste each thing you want to move into it.

They've been burning off all around us and it's forced the field mice and rats into our area. Our cat and dog are both vitally interested in the activity. The cat's pretty good at catching them but she just maims them and lets them go. So I've had to put out D-Con. Ish.

I've missed you and everyone, Carol. Will have to get around and see what I missed.

Hi Ilene, a flash drive is one way to do it, but there is an even faster way and I'll pass it along when I find out. Kitty has kept our chipmunk population at bay which is good. I just hope the cat population doesn't explode! Thanks for stopping by.

I'm so glad your new computer is up and running. Yay! Your photos are too cute. Wild kingdom at your house, huh?

Yes, very wild, Mina! Kitty is always around these days! Makes it very interesting! Thanks for stopping by!

Have a great week,
Jules
and lots o kitties

Thanks Jules! Yes, this one has a personalty just its own.