St. Nicholas and Secret Santa at the MG Holiday Gala!

St. Nicholas was a rich and famous Bishop in the early days of the Christian church and became one of the most beloved saints ever. He is the patron saint of children, especially school boys, of poor maidens, of sailors, of travelers and merchants, as a protector against thieves and robbers, his name was constantly used in prayers of Christian people. Nicholas was born in Asia Minor. He was dedicated at an early age to the church. After his ordination as a priest, his parents died of the plague leaving him with a vast fortune which he used for charitable works. He was remembered as a giver of gifts at Christmas time.

He is especially revered in Holland. On December 5th, St. Nicholas Eve or December 6th, St. Nicholas Day, children placed wooden shoes on the doorsteps in the hope that the good Bishop would reward them with the traditional gifts of chocolate, other sweets or even a gold piece. Even though we have turned this dignified Bishop into a fat and jolly good Saint Nick, his memory is still preserved. The giving of gifts and the love of children are the importance of the season. This information is from Christmas at Caprilands: Legends and Recipes by Adelma Simmons. 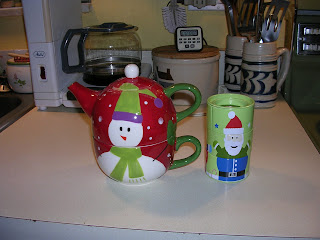 My Secret Santa at the Master Gardener Holiday Gala did a really good job. He or She knew that I like tea/cocoa pots and mugs and hot chocolate on a cold winter's day. When I showed the herbal husband last night, he looked at the Candy Cane Cocoa container and said "It's like Rubik's Cube!" My eyes glazed over! Why does everything have to be about math? That's is one of the key reasons why I married him though! When I learned he taught Statistics in college that closed the deal! See all three parts spin to create new Santas! It is very clever. I'll let you know how the cocoa is later! Stay warm! P.S. The hot chocolate is yummy! 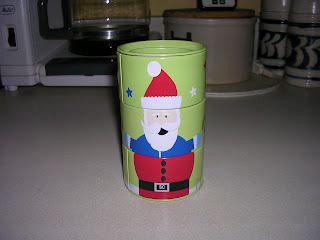 Enjoyed the history of St. Nicholas... I must dig out my copy of Christmas at Caprilands! We are on the same wave length re: teapots for one! I particularly like the mug that creates 'different' Santas!
Nancy

Not a mug, but the Candy Cane cocoa container! It is very clever!