The Adventures of Kitty and. . . 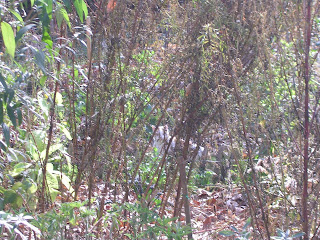 Again you will just have to take my word for it, (archived photo of Kitty a/k/a Ginger Snap (I think))(Please correct me if I'm wrong.) GS was in the front garden yesterday taking a sunbath.  It spotted a young squirrel on the fence.  The squirrel didn't seem to be aware of GS.  GS had its eyes on the squirrel.  At times it was a game of GS, squirrel and dog in the street being walked.  Squirrel ducking down under the fence line.  We captured it in photos and I will share them later.  Somehow though GS and the squirrel lost interest in the game.  I'm happy to report both survived.  Rainy day here.  Hope you are having a great day wherever you may be.  Talk to you later.
Posted by Lemon Verbena Lady at 11:31 AM

Email ThisBlogThis!Share to TwitterShare to FacebookShare to Pinterest
Labels: Adventures of Kitty and

Lol...The image plays vividly in my head. I feel as it I am watching the entire scene.

Thanks dear Mina for stopping by! Photos later!