One of the Early Risers in the Herb Garden! (Updated for Carla's and Cindy's Questions) 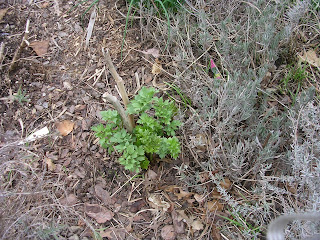 This was my lovage plant last week.  It is twice as big now.  I did a post about lovage and carrot soup in 2008.  I want to embellish that post and talk about lovage the plant.

Lovage (Levisticum officinale) is a perennial that for those of us in the northern tier of the United States likes full sun or part sun (morning sun in the south).  It is also called love parsley and sea parsley.  I would call it celery on steroids.  My book that I have called Herbs for Texas (Yes, a gift from The Herbal Husband when he went to Houston to visit his relatives.  Some times I forget what great herb books I have!) says that lovage is a tender perennial.  I find that hard to believe because it is very hardy for us.  It is a native to southern Europe.  It looks like a giant celery plant.  It does have problems with leaf miners and hot weather will burn the foliage (from the Texas book).  Maybe that weakens the plant and it doesn't always survive in the south.  I just cut the browned and leaf minered leaves off and it grows new ones.  It gets 4 to 6 feet in our garden so you want to put it in the back of a border.  We have it in several places, but it is NOT as weedy at the garlic chives!

You can collect the seeds and use them in bread or cookies.  All parts of the plant are edible.  Stems are hollow and can be used as straws for bloody Marys.  It is very easily air dried and stored in containers.  Can also be frozen as well.  Lovage should be avoided by pregnant women and by those with kidney problems (from the Herbs for Texas book).  I will try to remember to put a photo from last year's garden.  I would be glad to answer your questions about lovage or any other herb you may have.

Carla, my blogging friend from California who blogs at Thyme in a Bottle asked this question about lovage: Is it better to buy a plant or buy seeds?  I don't have a whole lot of space to start seeds inside, but since this is an early spring herb, I'm guessing you could direct sow these in the ground now because they take 90 days to maturity not too much of a problem for you who garden in California.  I like to direct seed basil, dill and nasturtiums and I don't mind extra seeds of those herbs.  I just don't need 100 plants of lovage.  I think you are near Summers Past Farm, Carla.  I would call and see if they sell lovage plants.  One or two plants at most should be enough for you.  If you want seeds, Nichols Garden Nursery  in Oregon and Johnny's Selected Seeds in Maine (although they were backordered until April 21st) sell lovage seeds.  Hope this information is helpful to you and all of my readers.

Cindy, my blogging friend from Texas who blogs at FW Dirt asked whether it tastes like celery.  It is stronger than celery, but not in a bad way, Cindy.  I would say there is a deeper depth of flavor to lovage.  I would use less in a recipe that calls for celery and add until the flavor is to your liking.  Add half of the amount you are using at the start and about 15 to 20 minutes before the end of cooking time, add the rest.  Because until like bay leaves and herbs like rosemary or thyme, some of the flavor of the more delicate herbs are cooked away if you put all of the herbs in at the beginning of the cooking time.  If you are used dried lovage, you would add less than fresh about three times to one, fresh to dried.

Heard about the car and, of course, what I thought might be wrong wasn't and it wasn't as much money!  So I worry for almost nothing!  Talk to you later.
Posted by Lemon Verbena Lady at 12:47 PM

This is one I don't have. I like the recipe you posted so now I need to find this plant. Do you think a plant would be best or should I find seeds? I will plant it in a shadier spot I think since we have such hot summers.

Yippee kind of afternoon here as we got some rain - wished the folks west of us had gotten some too. Fires still blazing... :(

Great info about the lovage. Does it taste like celery, too? I try to grow cutting celery for my cooking needs but lovage sounds like a much better plant.

Happy to hear good news about your car.

I learn so much about herbs from you. Thank you for always sharing.

I'm so glad you got rain, Cindy. We are at about 7 inches surplus and getting more tomorrow. It is stronger than celery but not in a bad way. So a little goes a long way. Cutting celery can be tough to grow, I think. So lovage is much easier to grow, but it may not be a perennial for you in Texas. Thanks about the car. I was sweating profusely. I just hate taking the car in for service.

I'm glad to help you with any information I can, Mina.

Thanks for stopping by.