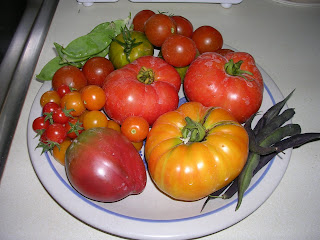 I will try to tell you what kinds of tomatoes you are seeing at the 12:00 o'clock position are the 'Large Cherry', the two big red ones, 'Jet Star' and 'Celebrity', the orange one is 'Old German', then 'Purple Russian' in the 7:00 o'clock position, 'Sungold' are the orange cherries and 'Matt's Wild Cherry' are the tiny red ones and last but not least at the 11:00 o'clock position a 'Green Zebra'. There are 'Oregon Giant' snow peas and purple beans that we don't know the variety, but once they are cooked they are green! Bummer!

I was at Gardenline this morning and the big topic of conversation was late blight of tomatoes! A real problem in this area. About 40 of 67 counties in Pennsylvania have it this year. You can learn more about late blight at this link from Penn State. We have been spraying chemicals. We try to be as organic as we can, but The Herbal Husband didn't want to lose his tomatoes this year! We listened to a Webinar from Rutgers University in New Jersey about late blight and they said that chemicals rather than a fungicide with copper were much better to protect from late blight. I figure I have been around over fifty years and I have ingested more than a little chemical, a little more won't hurt! Hope late blight hasn't damaged your tomatoes!
Posted by Lemon Verbena Lady at 2:39 PM