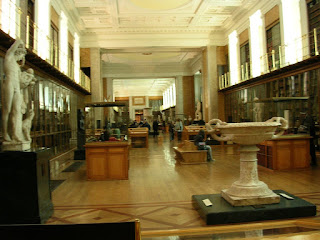 We hit the ground running in London. We first went to the British Museum that I had not visited for a number of years. Always something new to see here! This is by far my favorite room called the Enlightenment Room. The Enlightenment was an age of reason and learning from about 1680 to 1820. The exhibit demonstrates how people in Britain understood their world. It is housed in the King's library, the former home of the library of King George III. The room itself is just magical and if you love books, like I do, it is just wonderful! It is divided into seven sections exploring the disciplines of the age of religion and ritual, trade and discovery, the birth of archaeology, art history, classification of the decipherment of ancient scripts and natural history. It was opened in 2003 to celebrate the 250th anniversary of the British Museum. The room has something for everyone!
Posted by Lemon Verbena Lady at 3:35 PM

fabulous! how nice of you to share your trip dear! i have enjoyed "seeing" these sites i have never seen! big hugs and thanks! love the explanation for the enlightened room! :)

Glad you are enjoying it! There are more surprises coming later.

Whew! I'll continue with the adventures later and you know we had some!